In Europe at the moment, there are over 7.7 million Ukrainian refugees. I was reading an article about a family of refugees who had been living in the Ukraine for a few years, following having to leave their previous country. Can you imagine, being a refugee, thinking you are safe in your new home and then living in a war zone.

For all refugees, not just the Ukrainians, it must be hard for adults, but for children, who do not yet have the capacity to understand the reasons, they must be so confused and so scared. On the whole, most countries openly welcome refugees, but for children they have lost most of their being – their home, toys, family, school friends. We talk about attachments being so important in the first few years of a child’s life, and yet some of the most important parts of their lives have been ripped of them. Things they have experienced and witnessed will haunt them for the rest of their life.

What is World Refugee Day?

World Refugee Day is an international day designated by the United Nations to honour refugees around the globe. It falls each year on June 20 and celebrates the strength and courage of people who have been forced to flee their home country to escape conflict or persecution. World Refugee Day is an occasion to build empathy and understanding for their plight and to recognize their resilience in rebuilding their lives.

It is organised by the United Nations High Commissioner for Refugees (UNHCR) and was originally created to help millions of Europeans after WW2. You can find out more about their work here.

‘Whoever they are, people forced to flee should be treated with dignity. Anyone can seek protection, regardless of who they are or what they believe. It is non-negotiable: seeking safety is a human right.

Wherever they come from, people forced to flee should be welcomed. Refugees come from all over the globe. To get out of harm’s way, they might take a plane, a boat, or travel on foot. What remains universal is the right to seek safety.

Whenever people are forced to flee, they have a right to be protected. Whatever the threat – war, violence, persecution – everyone deserves protection. Everyone has a right to be safe.’ 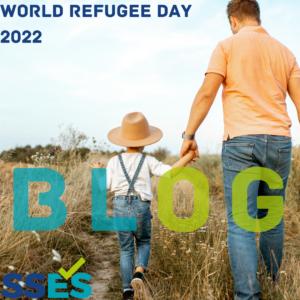